So I've decided I'm switching over to tumblr. I find the picture-blog interface a lot more fun and dynamic.
Hit it. supersergi64.tumblr.com
Posted by SuperSergiCal92 at 12:04 AM No comments:

GLEE, please stop defaming yourself with Katy Perry. I know you've ripped *ahem* reproduced a multitude of artists but let's set some decent standards here. I'm starting to think this show just needs to compose its own music and balance out the popular, radio one-hitters that they keep throwing out episode after episode.
I, as many others, would be more inclined to appreciate the musicality of it more. I don't want to have to begrudgingly type out hulu.com after I've been filled in on how much the episode sucked.
Also, less of a focus on Kurt would propell the show a bit.
Thoughts?

“You’re friends with all of these gay, middle-aged men on facebook.” *accusingly*

“Well, then don’t make assumptions. I know you facebook stalk me and all…”

“Well, how would you know otherwise??”

“Get over it. I can’t help but see those random comments pop up on my Newsfeed.”

“I can introduce you to some of them.” *wink*

Posted by SuperSergiCal92 at 5:34 PM No comments:

The magic of 'old' Disney

As I take an extended hiatus from the constant drone of collegiate life, I find myself exploring things that I miss, desire, or am simply curious about. I found the clip of "When you Wish upon a Star", sung by Jiminy Cricket(Cliff Edwards, 1940), and just felt like sharing it. It totally warmed my heart. Such nostalgic, powerful emotion. The new Disney simply doesn't compare....I wish they would bring back the classic Disney, with its heartfelt richness, yet exploitative and dark themes. Kids in generations to come have everything sugar-coated for them...I'm sure Walt Disney would be horrified if he saw what the current 'Disney Channel' looks like(High School Musical, Hannah Montana, etc.)
I was rewatching The Beauty and the Beast and was shocked to see that in the one scene during that final, climactic battle on the castle ramparts, the villian(hunky baron-looking guy) actually stabs the beast on his side, drawing blood. We certainly don't see that in Disney movies nowadays! Another example, in Pinnocio, whenever he and all the children are taken to Pleasure Island, he is peer pressured into smoking cigars...! and the merry children he was with are all transformed into donkeys, consequently being whipped and kicked around by adults! Shiiiit. Think of the kind of parental censorship that would spew out nowadays. These are just minor examples, too...I remember being legitimately scared while watching those movies....yet so enticed by them. I know it sounds cliched, but the classic Disney will forever live on in my heart, and it's not just one of those things where the movies are relative to the viewer's time period, when he/she grew up watching them, thus having the nostalgic feelings associated with those films and dismissing the new ones...they are inarguably, just BETTER! better than the crap that we see now.

This doesn't just apply to Disney..."Hocus Pocus", "Return to Oz", and "Witches"...all of those childhood favorites from the 80's still stand as conventional children's films...yet are comparatively darker and much more sinister than anything Disney has produced nowadays. Crazy business.
Posted by SuperSergiCal92 at 3:51 AM 2 comments:

Let me start off by saying that last christmas I came to Barcelona, I didn't bother making any concrete plans with friends/people prior to flying over, as I was confident that I could call them and meet up with them with little issue. I was miserable. Spent the majority of those two weeks suck at home, or wandering about the city aimlessly. I am thankful for the several, non-flaky ass friends that I was able to see and enjoy my time with. Props to you guys.
This year seems to have hardly changed. I can't stand materialistic people. In this day in age, as an eighteen-year-old, I'm pretty fed up with having to accomodate myself for others. It seems like I always make plans in advance and they either conflict with other pre-existing plans or don't happen at all.

I've called and messaged quite a few people, and none of them seem to feel the need to reply or give me a specific time or day to meet, really. I'll list a few. SO, about two weeks before my flight, I messaged one of my closest childhood friends(whom I've known since I was about eight or so) to let her know I was going to be around for the holidays and, like every year, was hoping to see her. I post on her wall that I was here, and when we could meet up. No reply for a couple of days. I check her wall and see that she has been actively replying to other posts on her wall. Cool. Just this very day, (and its oddly coincidential that it occured on the same day) I am walking down Las Ramblas, the center of Barcelona, and see her walking with a group of friends. She recognizes me and I turn my head wistfully away, feeling justified. Seconds later, I find myself even more frustrated that she didn't bother calling out to me or seeing what was up.
Scenario #2. Going out to the clubs alone is something that I leaves me feeling empty and unaccomplished. I had a "thing" with someone two years ago, which proved to be fun, fulfilling, and introduced me to the kind of night life that exists out there. Ever since, I feel as if I've been trying to recreate(if not half-heartedly waiting to run into the guy, whom I met at this particular club)that, with someone else, save for the emotional attachment.(I was not who I was two years ago, thankfully, so this is customarily managable) There's a certain uncomfortability about sitting alone at the bar while everyone else is talking and having a good time and watching the shirtless twinky boys poledance. Dismally, the many guys that have approached me have yet to struck a shord. Once I make it evident that they're not my type, they don't seem to want to have anything to do with me. Not even socialize. If I could just be casually careened into their group of friends, the possibility of me finding someone I'm attracted to would broaden.
Dating as a chubby chaser implicates navigating your way through the internet world. Men online: A picture of your face will always say MUCH MORE than a picture of your dick. Especially when its within the confines of a square, pixellated box. There is NOTHING flattering about it. I don't care for it nor have I ever been turned on by such, frankly. I'm a bit disappointed with San Francisco in this regard. I went out to the street fair in hopes of meeting someone and all that went down was getting groped by a stranger and this impish-looking grunge/scene kid asking me on a date.

This is all I have to say for tonight. I sent out a couple of more messages out and am dejectedly waiting for responses.
Posted by SuperSergiCal92 at 12:15 PM No comments:

Came across this on Yahoo! Shopping...one of the top 19 gifts nobody wants. The 'Peekaru'. 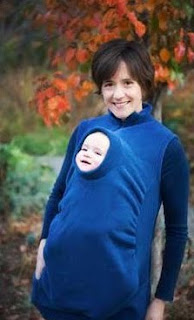 Seems oddly comforting, yet restraining. I don't know how I feel about babies being compressed to their mother's bossom. How are you supposed to eat without danger of food spilling onto fragile, infantile eyes? I wonder how you could walk around with that lump under your shirt...like a parasite wiggling on your stomach. Guess it gives mothers an excuse to cloak insecurities! "Hey, you look fat." "Ah, that's just my baby." Ingenious? Useless? LOL'ed?

Sleep, without a doubt, is the most endearingly valuable thing to a college student. Remember the times, as a child, when sleep was a negligence, and we had to be chased by our scolding mothers and put to bed?(bath time is also applicable) it's interesting how radically that dynamic has shifted, for I know I was one of those kids. Aside the periodic bouts of somnambulism, I always acted in strife of what my parents subjected me to. Sleep was a necessary evil that stole away the diversion and excitement of the day. And now, as I haul my morose, bleary-eyed ass out of bed for my 8 a.m. class every morning, I come to realize just how cherishable such a thing has become. A lot of students here at CCA seem to never have time for it. "OMG I totally pulled an all-nighter working in the ceramics studio..." I haven't found the need to do that just yet. TIme budgeting is always a safe alternative to downing a liter of coffee from night-to-night, meticulously working on a project. Admittedly, there have been moments this semester where I've been hastily cramming for a test or such, but I am proud to say that I am very content with my workload.

I'd like to close up this post by reminding you scarce, but avid readers that I am leaving for Barcelona at the end of this week, so....no calling or texting!

BTW I will be posting up artwork soon! Part of our final grade each semester involves a digital portfolio, which will force me to take pictures of my pieces, as opposed to scanning them on the crappy miniscule scanners in the lab, hereby saving them from camera to computer. Cool beans.
Posted by SuperSergiCal92 at 5:41 PM 1 comment:

Hey person(s?),
I goofed. My blog is back and piping fresh.

In the words of Ralph Waldo Emerson,
"Do not go where the path may lead, go instead where there is no path and leave a trail."
Posted by SuperSergiCal92 at 7:45 PM No comments:

SuperSergiCal92
I believe that happiness comes in small, under-appreciated notions that find their way into your heart.